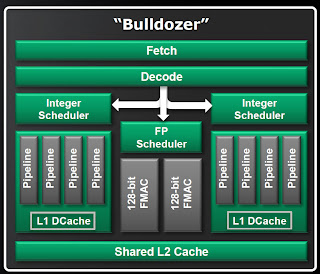 AMD's so called Strong Thread approach in the Bulldozer module is that really compelling?

Extra cores are added when a processor can't operate at a faster clock speed, that's a good and easy way to expand a product line with effectively faster products, even though it may NOT be any faster depending on whether the applications are taking advantage of the multiple cores. But fully duplicating x86 core is expensive to scale up.

Intel hyper-threading is a good idea in certain cases, with only little more hardware it allows multiple threads to share the functional units in a core with lower context switch overhead, tolerating memory latency as memory latency is relatively high. That works well with
On the other hand, AMD's Strong Thread includes two sets of integer units and L1 data cache in a Bulldozer module, which is heavier than the hyper-threading approach, but more lightweight than fully duplicating a x86 core. That effectively allowing a thread to enjoy full private L1 data cache during its execution quantum, while hyper-threading works in a shared L1 cache like environment. Whether the module supports cpu affinity i.e. binding a thread to a particular core of the chip, is something we should be looking for when more details are available.

Overall, the AMD Bulldozer is an interesting architecture. It has great potential to exhibit higher performance at lower cost. Its benchmark data is something we should keep an eye on.

This work is licensed under a
Creative Commons Attribution-
Noncommercial-Share Alike 3.0 License.